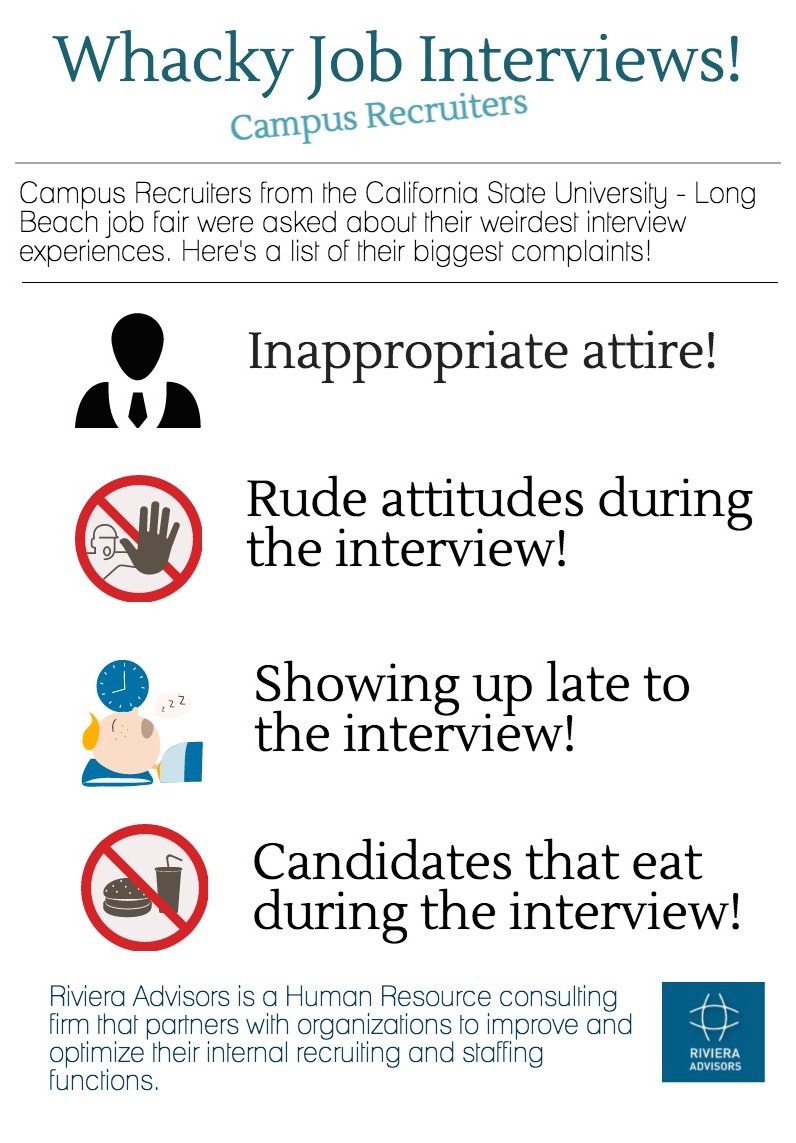 California State University – Long Beach (CSULB) is one of the largest Universities in the California State University system. The campus has a wide range of majors, programs, and career opportunities to help students plan their future. One event that the campus hosts is the CSULB job fair held every semester. At the job fair, many corporate recruiters represent an array of companies and organizations in search of the most qualified university candidates to fill their positions. With nervous students hunting for job opportunities who may have little to no experience, it is quite common for campus recruiters to undergo rather bizarre candidate interview experiences.

A few bizarre interviews stood out to me. One Corporate Recruiter mentioned that she had scheduled an interview with a candidate who gave her an unexpected curveball. As the applicant arrived to the site, he brought his spouse and several children with him. The applicant requested to have his entire immediate family join in on the interview process because they were family-oriented. Despite his request, the candidate was kindly informed by the recruiter that it would be ideal to interview with him alone.

Another recruiter that I spoke with recalled a terrible interview where the candidate came in with a bad attitude. Immediately upon arrival the candidate gave her the ultimatum to give him a reason why he should choose the position. He rudely stated that if her answer to his questions were not satisfying then he would be happy to leave! Not surprisingly, he was not a good fit for the position and was kindly dismissed from the interview.

One common theme that was present amongst these recruiters was a recurrence of candidates coming in with inappropriate interview attire. I often heard recruiters discuss stories about how candidates would come into the interview dressed in flip-flops, t-shirts, fashion suits and tuxedos. Every single time, the candidate was completely unaware of their clothing mistakes! Other awkward themes included candidates who would text, answer phones, and even eat pizza during the interview! It was also not uncommon for me to hear stories regarding candidates who showed up significantly late for interviews without warnings or apologies. Recruiters also discussed interview situations where candidates were rude and felt entitled to the position they were applying for. Often they would feel that they were overqualified for a position even though their qualifications showed otherwise.

I myself have had awkward interviews from previous internships. I once interviewed a candidate who was very rude and demanding on the phone. Immediately after the interview he demanded to know when he would start the position. He also made it clear that if I did not let him know immediately, that he would find somewhere better to apply. Despite the lack of respect, it was important for me to remain informative and respectful to the candidate’s concerns. If you are a recruiter, then it is safe to say that you have experienced a whacky interview at one point or another. They are inevitable and are essentially part of the job. A key strength that recruiters must establish during an interview is to learn to either redirect or adapt to an awkward situation. It is also important for recruiters to share their awkward interview experiences with their peers and even college students to paint an idea of what not to expect.

In the past month, I have been given the amazing opportunity to become the…

From our continuing series on "Weird Interviewing Experiences", comes this great clip from Cristela Mejia,…

Welcome to Insights!
Welcome to Insights from the Riviera, the blog that offers insights and regular commentary on all things recruiting, staffing and corporate Human Resources. We are all former global heads of recruiting and staffing, and for more than a decade have been helping organizations enhance their own internal functions. We’re known for our authentically-direct language and style, and we welcome our community to share yours as well.
Recent Posts
Posts by Category
Please feel free to get in touch with us to start a conversation about how we can help you can create a high-performance talent acquisition advantage for your organization.
Get In Touch